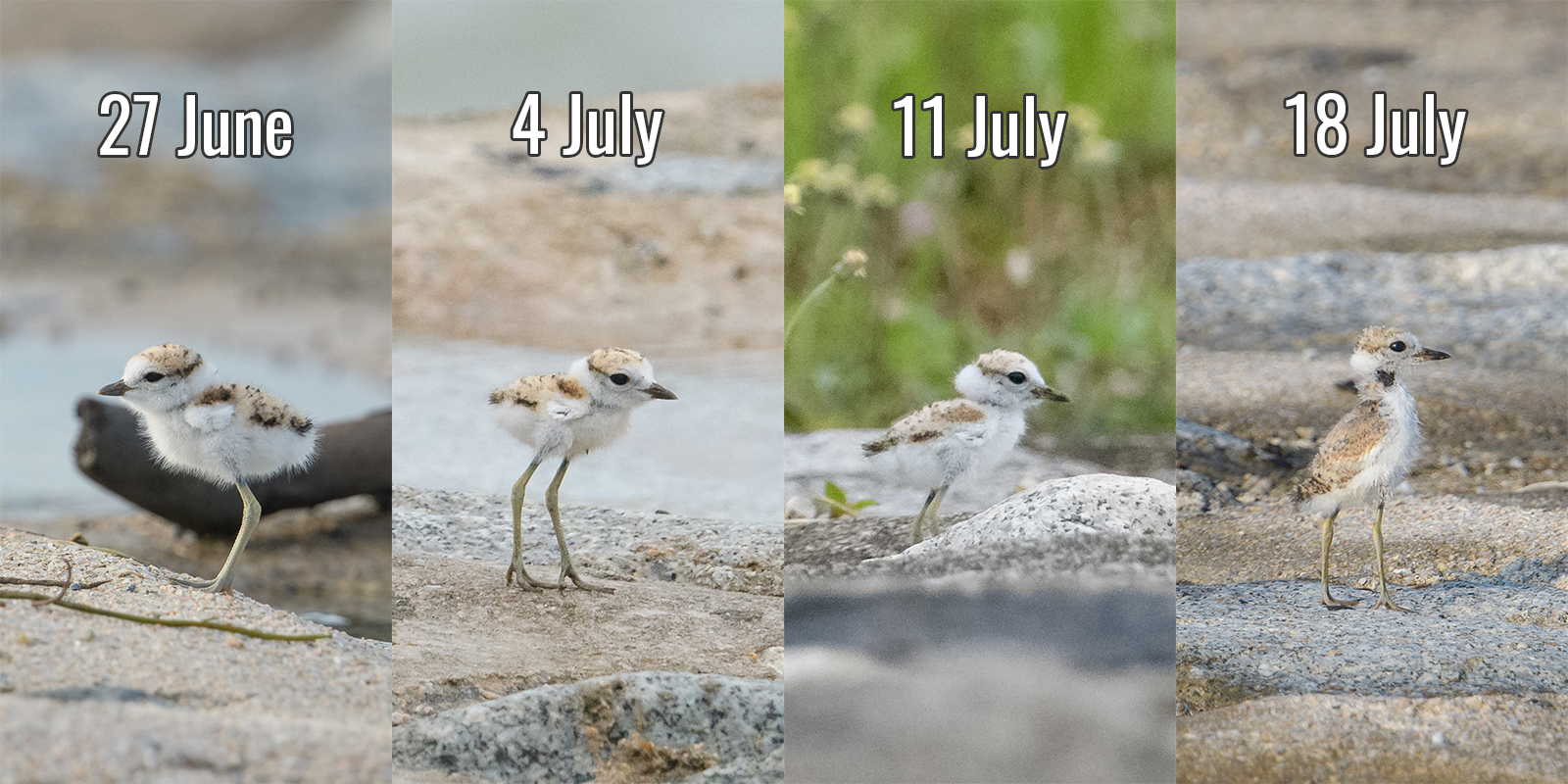 The Malaysian Plover Charadrius peronii is a small shorebird that inhabits coastal sandy areas and rocky shores. It is the only resident breeding plover in Singapore island and can be reliably found along the man-made seawall at Marina East. They are classified globally as Near Threatened (BirdLife International, 2017) and locally as Threatened (Lim, 2009).

On the morning of Sunday 27 June 2021, Lester Tan and I were walking along the Marina East seawall when we were halted by a soft twik from a male Malaysian Plover to our front. This was highly unusual as the Malaysian Plovers at Marina East do not typically vocalise, preferring instead to scurry away in silence.

With this thought at the back of our minds, we started scanning the area, locating a female Malaysian Plover slightly behind and below us in short order. We soon spotted movement from the female’s direction, which turned out to be an extra set of legs belonging to a very new Malaysian Plover!

As we approached slowly for better photographs, the female Malaysian Plover brooded the chick for a while (image 1) before running off, presumably to distract us from the chick. We kept our distance and the chick waited a while before getting up to follow the parent (image 2).

Over the next three Sundays, we revisited Marina East to document the chick’s progress (image 3). Each time, we were first greeted by the soft twik of the male Malaysian Plover a distance away from where we would eventually find the female and the chick.

On 4 and 11 July, the weather over Singapore was rainy and the chick was regularly brooded by an adult, probably to aid in regulating body temperature (image 4). By 18 July, the chick had grown discernibly larger. While we did not witness brooding, it still sought cover from threats. Chicks of the Malaysian Plover are precocial and are never fed by parents (Yasué & Dearden, 2008) but we also could not observe any feeding behaviour.

When disturbed, the chick tucked itself into the nooks and crannies of the seawall. Its mottled brown, white and black plumage provided camouflage while it nestled itself against pieces of marine debris (image 5). We also observed it hiding in grass adjacent to the seawall.

As long as we remained stationary at distance, one of the adults, typically the female, would eventually approach the chick while vocalising a series of soft twiks. The chick would then get up and follow the adult. We did observe brooding by the male as well, though less frequently.

While plovers are among the group of birds known for using the “broken-wing display” in response to disturbances (Gómez-Serrano & López-López, 2017), we did not observe this behaviour. We only observed them vocalising and attempting to lead us away from the chick whenever we ventured too close. Sometimes, an adult approached us while vocalising.

On one occasion when a flock of crows roosted nearby, the chick went into hiding while the adults kept watch from a distance. We observed an adult flying out to sea when dived on by individual crows although it returned to the site shortly after. However, when disturbed by humans, the adults did not fly off and always stayed within visible distance.

On Sunday 25 July 2021, we made our way to Marina East again. This time however, there was no twik greeting from the male Malaysian Plover. The female was nearby bathing and preening in one of the puddles atop the seawall. The pair of Malaysian Plovers had seemingly reverted to their typical non-vocalizing and more confiding selves, and the chick was nowhere to be found. The absence of the chick had been noted the day before, with adults reportedly being skittish (Francis Yap, pers. comms.).

The chick was independently discovered by Max Khoo a day before us on 26 June (pers. comms.), and would have been at least 28 days old, within the fledging window of 27-33 days after hatching (Wiersma et al., 2020). Unfortunately, we later found out that the plovers were preyed upon by a House Crow Corvus splendens, putting the journey of the young bird to an end.

Malaysian Plovers nest in coastal locations that typically include an intertidal mudflat for foraging, a sandy beach for nesting, and a shrubby vegetated area that can provide cover for chicks during disturbances (Yasué & Dearden, 2008). Natural habitats suitable for the nesting of the Malaysian Plover are declining locally due to developments. However, many local nesting records have been on reclaimed land and coastal defense structures – they have previously been documented laying their eggs on the seawall (image 6; Nicholas Lim, pers. comms.).

The diet of the Malaysian Plover is poorly known (Wiersma et al., 2020) but we have observed them foraging on algal cover on the seawall where they appear to feed on invertebrates, or perhaps even microorganisms. Interestingly, they are rarely observed feeding on the adjoining mudflat where other waders have been observed.

Across five weekends of observations, this was the only family of Malaysian Plovers sighted along the entire stretch of the Marina East seawall. During the migratory season, presumably a non-breeding period, there would typically be more Malaysian Plovers scattered along the seawall, including multiple male and female birds. Their highly territorial behaviour (Yasué & Dearden, 2008) likely makes it difficult for multiple pairs to share the territory when nesting.

Our observations suggest that the plovers might be adaptable to nesting on artificial structures, provided that areas necessary for food, egg-laying and cover are present. Locally, breeding has been recorded in March-April (Lim, 2009) and July-September (BESG, 2006; Goh, 2016), as well as in June this year (Raghav Narayanswamy, pers. comms.).

The presence of these pockets of breeding habitat are crucial to the continued presence of the Malaysian Plover in Singapore. Protection and management of such areas from human intrusion during the breeding season where the birds are most sensitive to disturbances can be considered.

Warm thanks to Francis, Max and Raghav for insights about their breeding, to Nicholas for sharing his photo and to the SBP team (Dillen, Movin, Sandra) for comments.