The Barred Eagle-Owl (Bubo sumatranus) is a relatively small eagle-owl that is found from southern Myanmar, Thailand, Malaysia, Singapore and southwards to Indonesia. Its natural habitat is subtropical or tropical moist lowland rainforests. It has also been reported in secondary growth, abandoned orchards, oil palm plantations and wooded gardens, showing its adaptability towards human encroachments. According to Wells, the Malaysian owls are in fact relatively unafraid of people.

In Singapore, it is considered a rare resident species with breeding records only at Pulau Ubin (Ubin Island).

In the main island of Singapore it was once considered an uncommon bird, but believed to have been extirpated since the mid 1920s. It was only in October 1996 that one owl was seen and heard at Bukit Timah Nature Reserve. Subsequently, sporadic sightings were also recorded at MacRitchie Reservoir and Nee Soon Swampforest. Recent sightings were at Bukit Timah Nature Reserve in 2015 and 2016.

On 24th May, 2018, Peter Ding reported a pre-dawn sighting of an adult owl on a tree along the path to Singapore Quarry, next to Fuyong Estate. This was relatively near from what was believed to be its usual haunt at Bukit Timah Nature Reserve. Subsequent follow up search did not manage to locate this owl. However on 7th August, 2018, Peter Ding again sighted and recorded a video of what appeared to be a juvenile Barred Eagle-Owl calling for its parents at the same area. So the search was on again to locate the juvenile and its parents. The other interesting detail to follow up was to confirm the sexual dimorphism in this species as previously documented in Johor by Con Foley et al. Finally with that established, to hopefully determine the sex of the juvenile owl. In order to accomplish all these, clear photos were needed.

At the time of discovery, the juvenile owl was estimated to be 8-10 months old, if the breeding cycle for this family was the same as the Johor birds. It was likely that the juvenile will soon disperse and the adults will start another breeding cycle towards the end of the year. Time was running out to locate it.

Thankfully based on information from Peter, the activity and location of the juvenile were somewhat predictable, and the owl was seen and photographed on 8th, 9th, 15th, 16th and 17th August 2018.

In the above photos from 16th August, the juvenile owl is clearly seen to have almost finished moulting into adult-like feathers and features. Only part of the head and ear tufts remain whitish compared to the adults. Also notice that it’s clutching a bunch of leaves and acting like its a prey. The previous day, it was seen attempting to hunt next to a house.

In the above photo from the morning of 17th August, the juvenile can be seen with blood-smeared talons, so feeding was just completed, although it’s uncertain whether the food was self-caught or given by the adult. The juvenile was calling before it was found so it’s likely it was looking for its parents. At night, the juvenile was seen flying off with a snake, and again the adult was nearby.

While all these were happening, the adult male had been spotted occasionally in the late evenings coming out of its daytime roost and flying off to the nearby trees to preen and prepare itself before starting its hunt at night. This presented another photo opportunity.

A video of the adult make in fading light, showing its activity before nightfall. By the end of the video, it was hard to see the bird but it’s in fact becoming more active.

Let’s move on to the identification of the adult male and female owls. It is known that Barred Eagle-Owls pair up and mate for life. So it should be possible to get both of them together in one photo to compare their size and appearance. One can speculate that if they are busy with caring for the juvenile, the chances of them being together side by side should be slimmer. It’s a busy time after all, having to feed a growing owl and teaching it how to fend for itself. On the other hand, if somehow the juvenile has just dispersed, the mating season should start again soon and the adults may spend more couple time together with displays of affection to reaffirm their bond.

The two photos below should help to answer the question of the sexual dimorphism of this species.

The differences in appearance between the adult male and female are in broad alignment with what was described in Con’s article. They are summarised below:

This leaves us the question of the sex of the juvenile. A side by side composite photo of the three owls is shown below.

It is clear that the juvenile more closely resemble the adult male in appearance.

As to its whereabouts, it has not been seen for more than 2 weeks as this article is being prepared. Wells mentioned that a juvenile that fledged in April was still with parents in August, but had left by the next breeding attempt in November. The related Eurasian Eagle-Owl (Bubo bubo) juveniles leave their parents between mid-August and mid-November. Settlement places were on average, 46 km away from their birth place. If the same dispersal pattern and distance can be observed in the Barred Eagle-Owls, this would explain the initial arrival of this species from Johor and their subsequent breeding in Singapore. Barred Eagle-Owls are long-lived birds. Wells reported one or a pair at the same location in Kuala Lumpur for a minimum of 14 years. Lets hope the adults stay on and repopulate Singapore with more of their progeny. 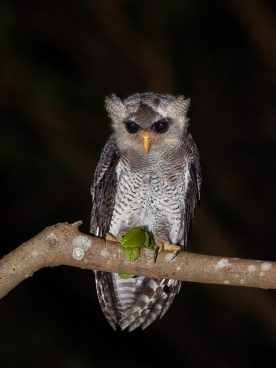 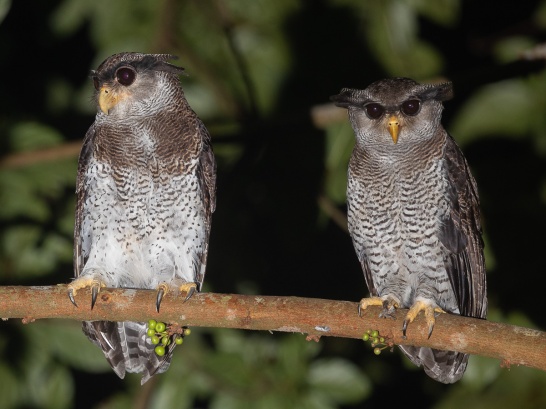 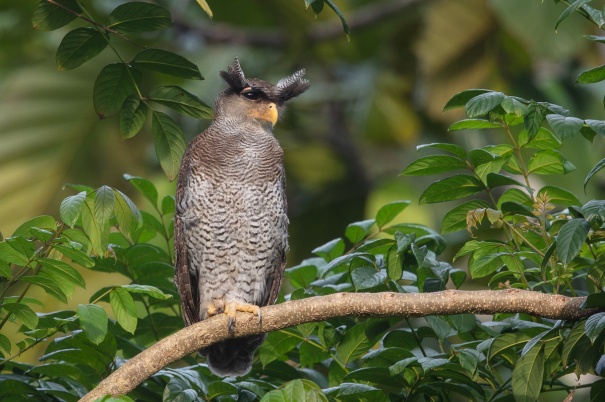 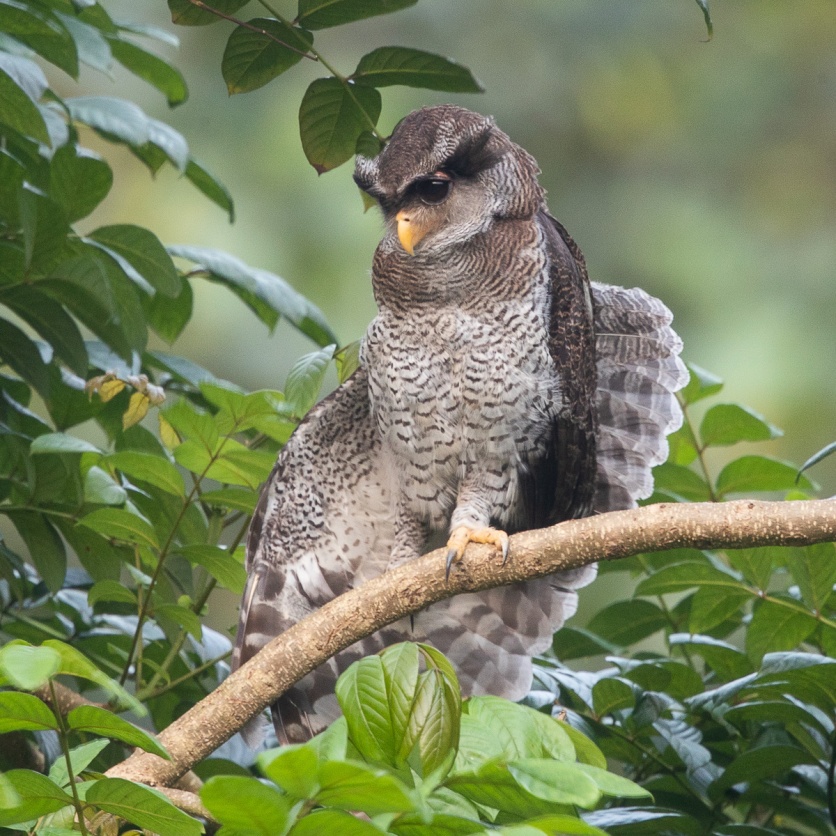