Twitching and dipping, words I have never heard before. Now, during my Big Year (a personal challenge to see as many species of birds as possible in one calendar year), I would never be more familiar with those two words.

I remember seeing Jen Wei’s Facebook post summarising his epic 2021 Big Year, and being mesmerised by the sheer number of mega rarities all compiled in one photo and to think that they were all seen in a span of one year by one person! It was especially awe-inspiring to personally witness Jen Wei twitching the Yellow-vented Flowerpecker at Bukit Timah summit. 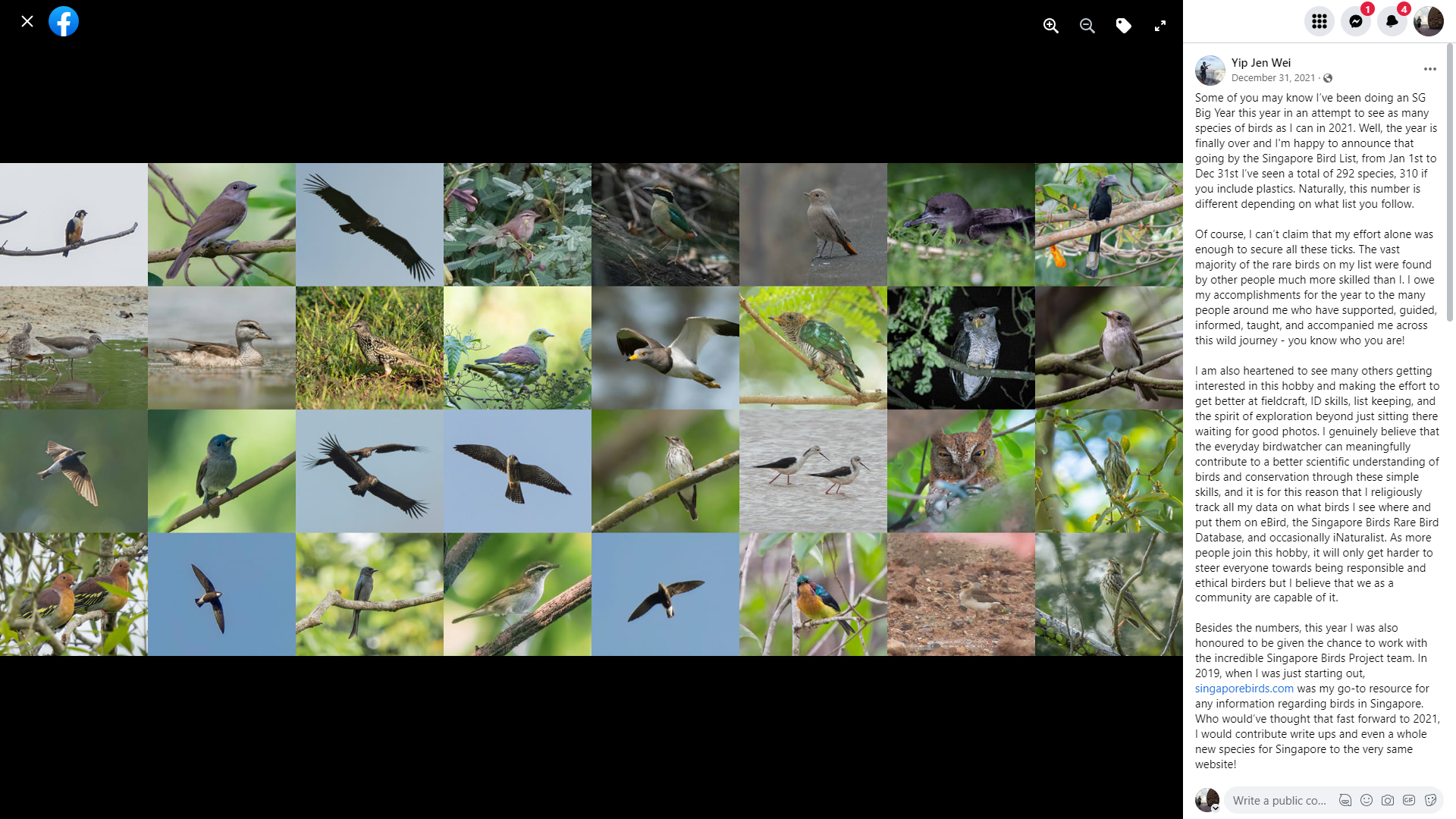 With major exams and other school commitments set to gradually build up over the next few years, I decided that Secondary 1 was a relatively free year to take on the monumental, time-consuming mission of a big year. Nonetheless, the life of a student is still crammed with school related activities, leaving me with much limited time for recreation. Birding only on weekends and holidays practically shortened my ‘big year’ to less than half a year. Every hour spent off the field was truly nerve-wracking – whenever I checked my phone after school, I would be distraught to see reports of rarities, praying that the bird would stay a week for me to twitch. That being said, even if it was challenging, that was what made it so fun.

In the course of the year, among all the lucky finds and successful twitches, two birding encounters made a particularly special impression on me.

It was 18th September and based on trends from data on eBird and SBP, Forest Wagtails would have started passing through Singapore en route to their wintering grounds. However, none were reported recently from the famous wagtail roost at Yishun. An encounter with this elusive bird on Rifle Range Link would otherwise necessitate an ankle-breaking hike at the crack of dawn. Taking a gamble of luck, I decided to head down to Yishun. The wagtails would usually fly in to roost at 6:15, leaving me with 45 minutes to search for the Forest Wagtail before nightfall. I climbed every block, checking each palm tree meticulously. Half an hour passed, and my determination was fading as I routinely scanned through hundreds of commoner Grey Wagtails. At that moment, just as my patience was wearing thin, I noticed a bird that was significantly different. An olive-green and white wagtail with a contrasting triangular black bib on its breast – a Forest Wagtail! Words cannot describe the satisfaction of finding the needle in a haystack, something special hidden within the common birds. 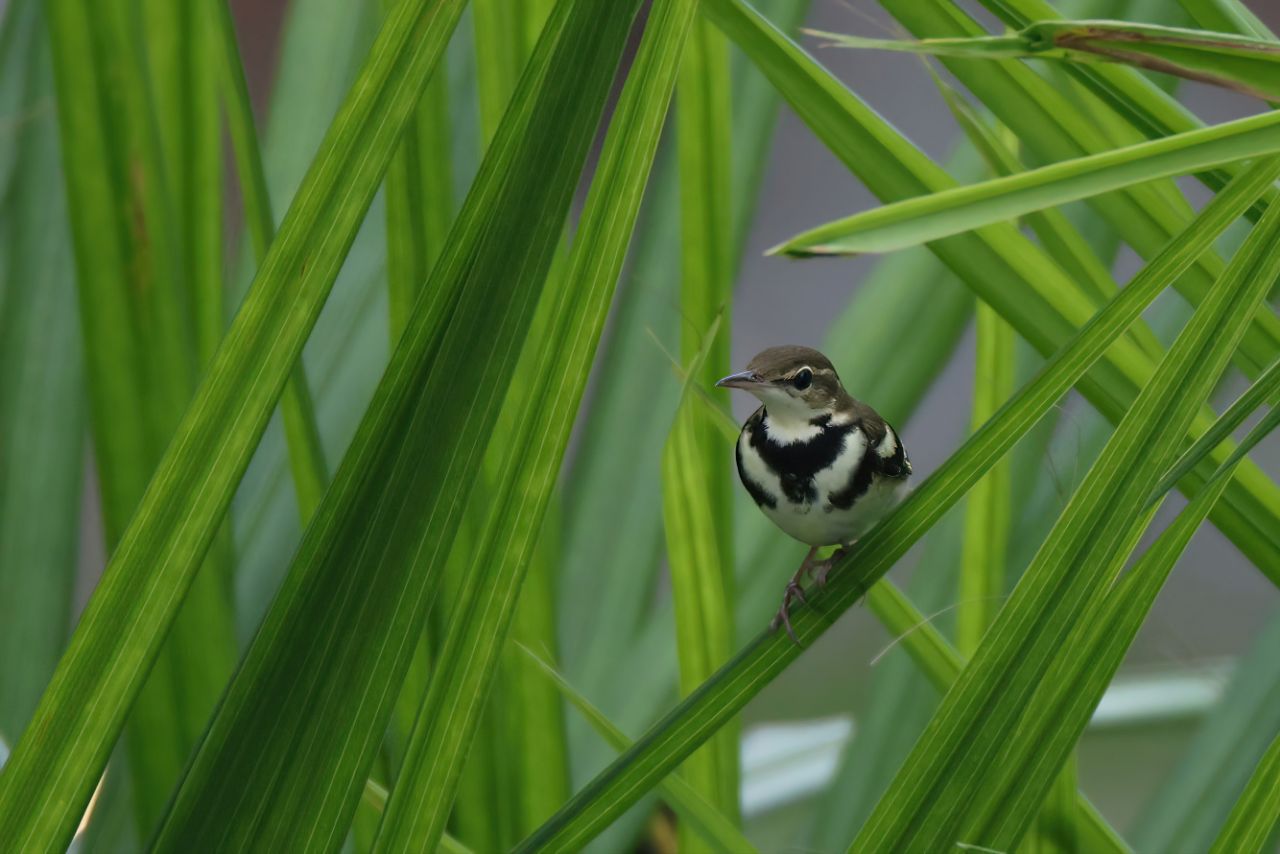 As the year drew to an end, it was naturally becoming increasingly hard to obtain new year birds. Since June, I had been trying sporadically to find the supposed resident pair of Cinnamon-headed Green Pigeons on the west end of Pulau Ubin. Pulau Ubin was one of the most rewarding sites for my year list, with many dispersants and visitors appearing on this small but significant island between Malaysia and main island of Singapore, but yet one of the least accessible and out of the way. Birding at Ubin was always an arduous and tiring task, not to mention the need to pay for a bumboat ride to and from the island, and a taxi to take us to opposite ends of the vast nature sanctuary that it is. With dreadful stories of many failed twitches of these nomadic, unpredictable pigeons, I decided not to give up on this beautiful bird yet, and returned to Ubin one last time in November before I went overseas. Thus, I arranged to bird with my friend Joshua and his brother for an entire day, in the hopes of giving my year list a final push. When we arrived at Changi Ferry Terminal, it was deserted save for two idle fishermen. Our sought-after pigeons were previously sighted in the early hours of the morning and time was of the essence. Out of desperation, my mother decided to pay an extra fee so we could fill the boat and leave early. As the boat set sail, we were off to a good start, having spotted an unexpected Lesser Crested Tern from the boat, trailing a flock of Greater Crested Terns along the coastline at the break of dawn. Stepping foot onto the sleepy island, rain clouds gathered ominously, and we reached Ubin Living Lab just before rain started to pelt down, forcing us to take shelter. We solemnly counted the passing swifts and swallows as we awaited the cessation of the rain. Little did we know, us being grounded by the passing thunderstorm would become a blessing in disguise. Out of the blue, Joshua spotted two Treron pigeons zooming past the shelter. Even before raising my binoculars, I could immediately see the distinct chestnut head and maroon wings of a male Cinnamon-headed Green Pigeon. I was melting on the floor in sheer joy. Later on in the day, we would go on to see a Broad-billed Sandpiper at Chek Jawa, my landmark 300th Singapore lifer, but yet, this pigeon, number 299, stood out to me as special, by far the most memorable experience throughout my entire big year, and it was because of my mother’s support and my friend’s help. 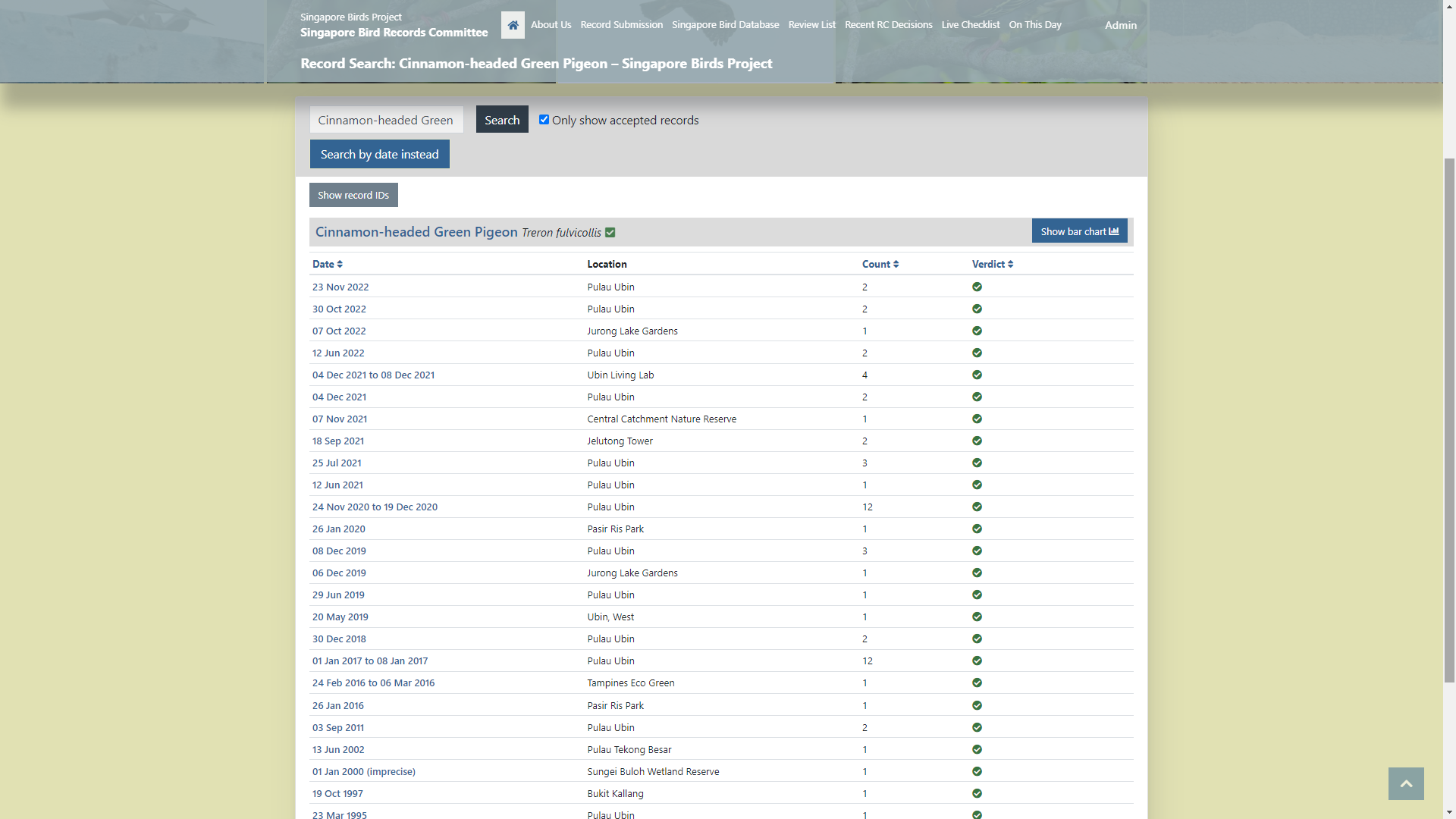 After this, my year list started to plateau, partly due to my travels and the shortage of rarities appearing in December. On 28th December, I found the adult male Blue Rock Thrush at the urban rooftops of The Pinnacle@Duxton – my 284th year bird and the final one of my Big Year. Including ‘plastic birds’, my year count was 300, meaning I managed to see 82.2% of all the species seen over the course of 2022.

As a student, over the course of the year, I learnt how to balance my studies with my hobby effectively. I also realised how connected the birding community is in Singapore, whenever a “star bird” is discovered, the news is always generously shared allowing all to enjoy the presence of it. I have learned so much from the community and have improved my skills significantly, not only in the field, but out of the field, with regards to identifying birds.

Another main difficulty I faced during my Big Year was deciding where to go to maximise my chances of ticking a year bird. Tools that proved to be extremely useful for my Big Year was eBird’s target species function and Singapore Birds Project’s data. eBird allows a simple and easy view of all the year birds I had yet to tick and shows the spots where they have been spotted before, by month. eBird was also very useful in being able to compile my year list and be able to track my progress easily without needing to painstakingly keep my list manually. (eBird is a community science initiative, meaning that this function only works because of the many diligent eBird users submitting their checklists and sightings so I encourage more birders to start using eBird!) Singapore Birds Project’s Singapore Bird Database and Migrant Bar Charts are phenomenal, providing up-to-date information on rarities, allowing better predictions on when and where to go to find certain target species. 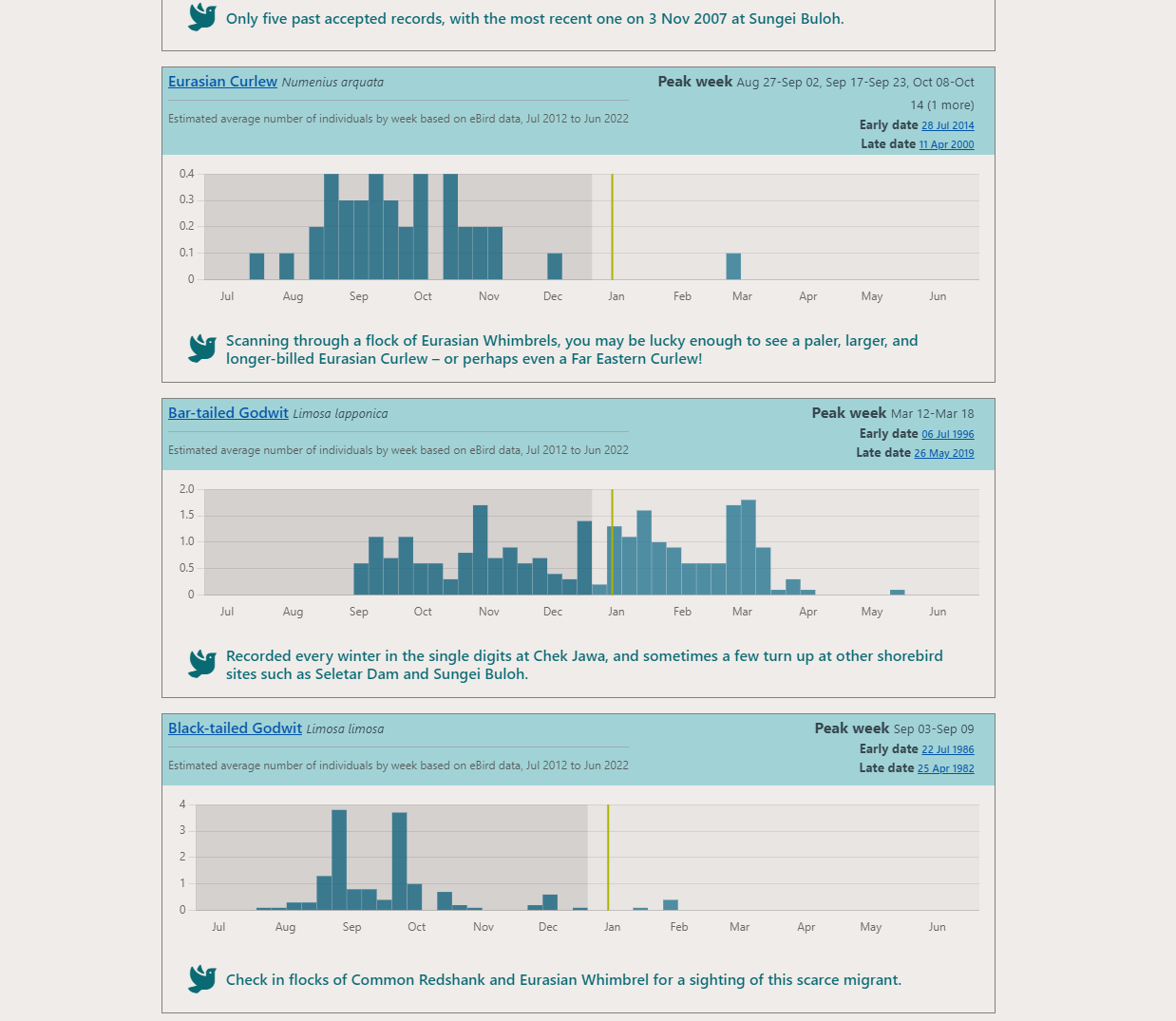 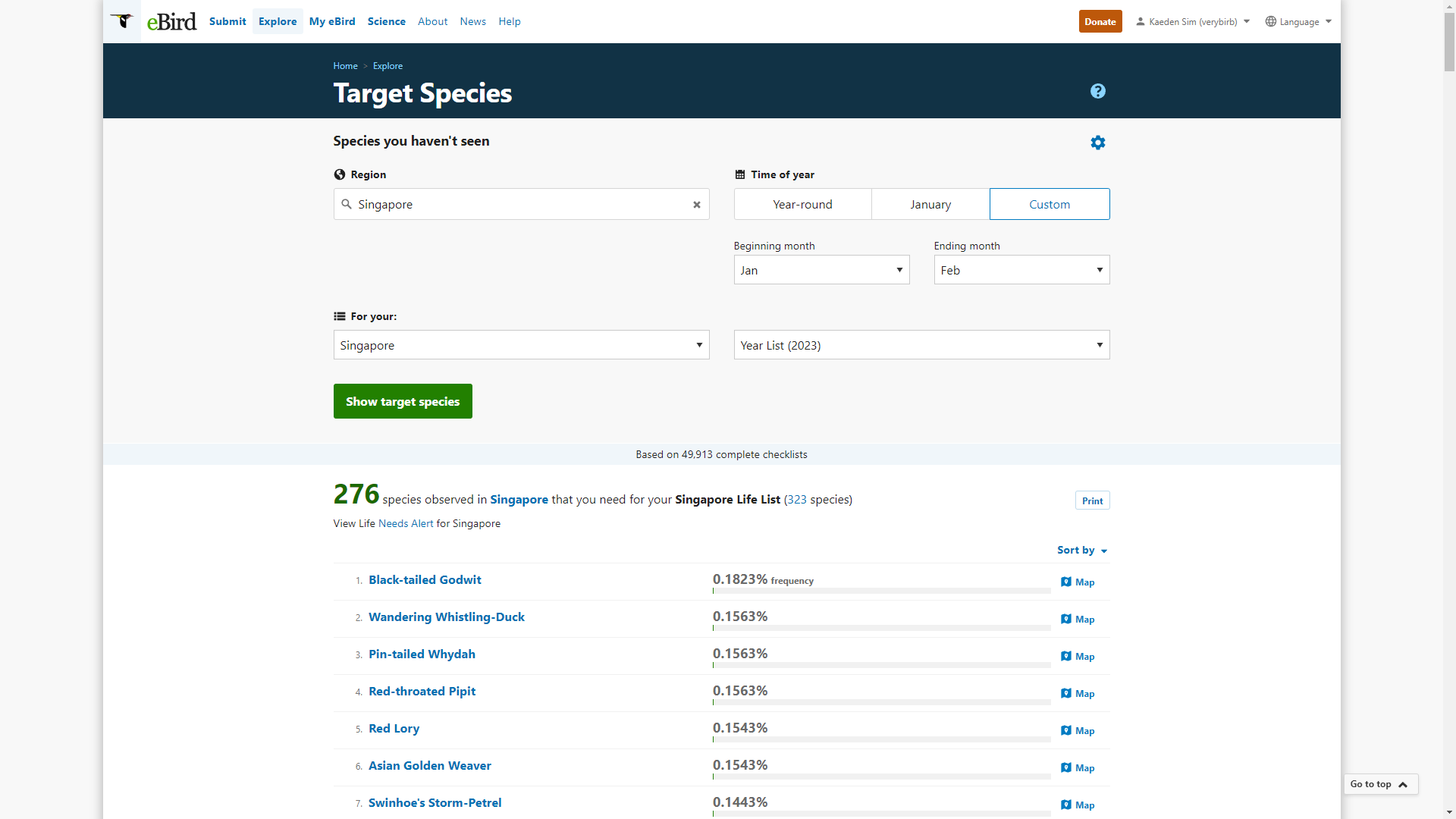 I would like to thank all my birding friends especially Jamie, Qian Xun, Pluem, Samuel, Gideon and Joshua for being great company. Secondly, I want to thank Francis, Oliver, Vincent Ng, Keita, Jen Wei, Jared, Raghav and many others for the guidance in the field and amazing finds throughout the year.  Lastly I also would like to thank CN and Benjamin Lee for the advice and tips and congratulate them on their impressive Big Year counts!

However, without the support of my parents, my Big Year count would have been a far cry from what it turned out to be. As the year progressed, my appreciation for my parents grew deeper and deeper. At a moment’s notice, my parents were always ready to rush me down whenever a rarity was spotted. Accompanying me on my birding endeavours, they drove me across the entire Singapore no matter how near or how far. Whenever I was disheartened from an unsuccessful twitch or when I was bursting with pride after a great find, my parents were always there supporting me. My Big Year would not be possible without them and I am forever grateful to be able to have such a thrilling and enriching Big Year with memories that I will cherish for a lifetime.

The many walks along the rooftops of Pinnacles were not in vain as I ended off my Big Year with the Blue Rock Thrush on 28th December, a bird which I missed by seconds on my first attempt.

On 16th November, it was so satisfying to witness the majestic Greater Spotted Eagle soaring above Mount Faber after many failed attempts.

Black and Red Broadbill, a very lucky find following my twitch of the Ruby Cheeked Sunbird on 28th May at Sungei Buloh Wetlands Reserve

After many hours of waiting and 10+ attempts, one final trip on 11th January yielded the Asian Emerald Cuckoo at Jurong Lake Gardens

Scanning through the flocks of Redshanks and Whimbrels for an entire week was worth it when on 8th September, the Marsh Sandpiper showed itself hidden among the more common waders.

My most productive raptor watching day was 6th November with 4 year birds with the most noteworthy being the 12th record of a Besra.

2 thoughts on “A Student’s Big Year”